In 2010, for the first time ever, iRig allowed guitar and bass players to plug into their iPhone and use their mobile device to play, practice and record with apps like IK’s AmpliTube, Apple’s GarageBand and thousands more.

Now everyone can plug in their guitar, bass or other instrument and enjoy killer tone on their iPhone, iPad, iPod touch, Mac or Samsung Professional Audio device — with the release of iRig, the world’s most popular guitar interface. 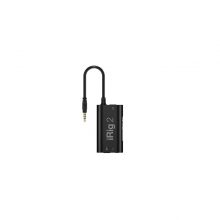